All day, i have had this quote in my head.  Replaying, like a song on repeat you can’t stop singing.  Over and over… “it’s not my freedom or free.”

“it’s not my freedom or free.”

“it’s not my freedom or free.”

where did this come from?

Being crazy busy at work and off the internets all day, i didn’t have a chance to google it. Which doesn’t really matter.  The point was less about from where the quote came, than the fact that it implanted itself in my head in the first place.

I’ve been thinking a lot about freedom lately, mostly around the ones we have covered in our First Amendment.

Mainly because two events happened just following my daughter’s birthday this last May that involved a both a douchebag and a lost soul.

So i’d like to break it down, if you have a few minutes to listen to the story.

Because at the end of it, i’m going to need you’re help.

Let me back up a second.  Set the stories in their context.

The birthday part is important.  She’s 12, my daughter, and whereas in years past she may have asked for Apples to Apples, an iPod Touch or a kitten, this year, she just wanted fun clothes.  She’s a tween-ager.  Don’t judge. It’s not like she’s going to ask for money to give to a non-profit instead of gifts.

So her grandparents sent her gift cards to a place they know she has loved in the past.

It just so happens that two days after receiving these gift cards, an insane article came out around Mike Jeffries, the totally plasticized 69 year old CEO around which the kingdom (and queendom) of Abercrombie & Fitch revolves.

In an article exposing the consumer he aspires to buy his moose-reindeer looking logo, he explains why it’s only the “cool, good looking people” he’d like to wear his brand: 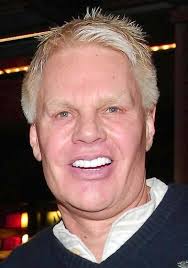 Just want to put a face with the quote here.  Y’all can come to your own conclusions.

And this plastic surgery laden 69 year old ass-wipe outwardly refuses to offer clothing over a women’s size 10 lest that consumer represent an icon that they so vehemently work to disavow.

He can openly discriminate against overweight, unattractive, unpopular women, and his right to do so is completely and utterly protected by the Constitution of our United States.

He has done nothing wrong.  Legally.

So, my daughter, in support of the not-so-cool-kids, now has cleaned her closet of every existing piece of A&F clothing and has $100 worth of gift cards.  And no idea how to dispose of them.

Can we not do something, socially, to send a message to this CEO? 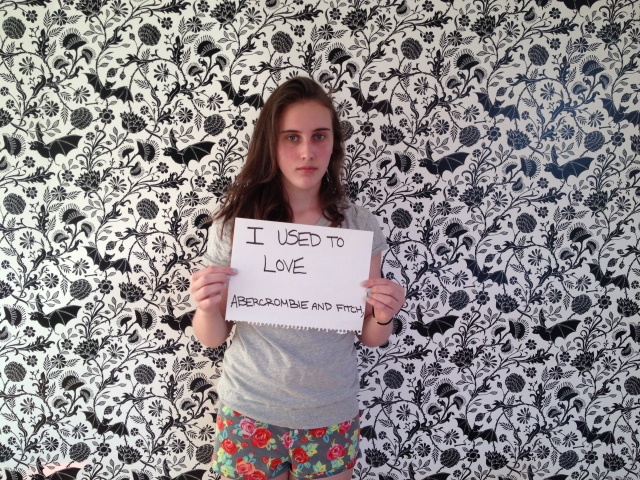 He’s lost one of his core consumers.  That’s a start.

And he should worry about that.

Now onto the lost soul.

The same weekend the story about Mr. CreepyFitch broke, we were in LA, visiting family.  After a day at Universal Studios, my daughter and her friend wanted to hit Hollywood Blvd, see the star studded sidewalk.  Not much more on which to expand here… I think they were hoping at the very least to find Michael Jackson’s star, and at the most, spot a celebrity or two.

We spotted this, instead: 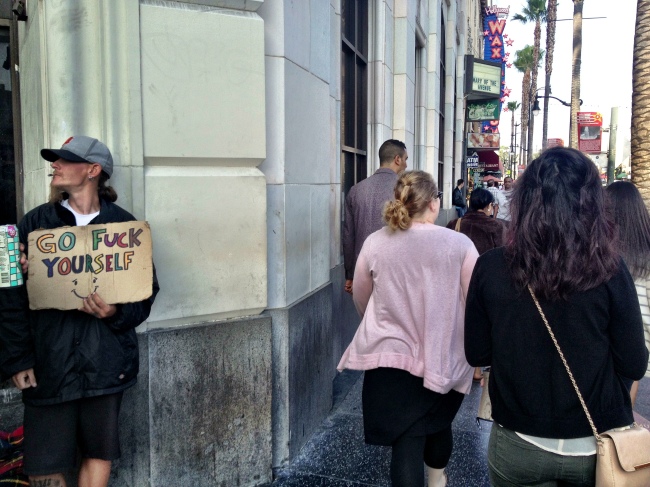 or maybe not.  I don’t know, who the hell am I to judge? He may be the happiest dude on the planet, son of a millionaire, a trust fund baby.  I don’t know his backstory.

I only know that my daughter passed him and asked me, “can he say that, mom?”

He can say whatever he wants on that scrap of cardboard, lest it not infringe upon the rights of another person in the process.

So i stealthily took the picture for her, my baby girl, to soft copy the moment in her life she learned a little about our First Amendment.

It’s not surprising, now, why that quote is stuck in my head, “it’s not my freedom or free.”

It’s a Tony Morrison quote.  It is written in her book The Big Box. I now remember that I used to read it to Savannah over and over and over and over before bed.  The lesson:  if we define freedom to our children by our own standards, then it is simply not their freedom.

Let them experience the evil CEO’s.  The stoner dudes on the corner that tell us to go Fuck ourselves.

It is a brilliant generation, our children.  At the end of the day, she DID ask for gifts to non-profits from her friends, in the form of donations to the Children’s Cancer Association, which is exactly what she received. 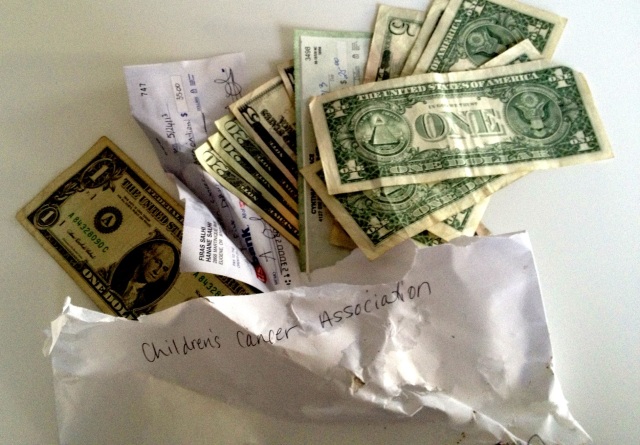 It is a gift, our First Amendment.  And these kids GET IT.

And it is an honor to celebrate and mourn those that defend it with their lives.

If you have made it to this sentence, you’ve read far too much of my rambling, but i’m so humbled you have done so.

Bringing it back to the $100 worth of gift cards sitting on our counter for A&F… any ideas?

6 Responses to Freedom or Free, f*ckers.