way to burst my bubble, Queenan.

Posted on November 4, 2012 by corradiniphoto

We’ve already established, if you’ve read any one of my blog posts, that i am not and should not be considered an “intellectual.”  I read a lot, i have a very good education, and i come from a family of SUPER smarty pants. So let’s just say i’m very curious, often wrong, yet well educated.

So because i’m curious, and i like to learn stuff, when i’m in the car, my radio is tuned to  NPR.  And when i’m at home, i read a lot of books.  So when a story comes on NPR about books, my ears perk.  I listen.

So here’s this guy, we’ll call him Joe Queenen, who was interviewed by Robert Siegel last week.

Joe reads a LOT of books.  About 125 a year.  Somewhere between 6000 and 7000 total.  I only know one guy who even comes close to that, and he’s my brother (i’m recalling memories of our youth where i would be out in the neighborhood playing kick-the-can or jumping on the trampoline, and he would be home from the library with another stack of 7 or so books that would be finished in a matter of days).

So i was keenly interested in what he felt qualified as “great” books.  the best he’s ever read.  And lo and behold… (i’ve never actually used that phrase in a sentence), he said two things that really pissed me off.

First is this.  James Patterson does not write his own books.

Now i don’t actually read James Patterson, but hold the phone, that’s not the point.

When i pick up a book, and i see an author’s name, i assume that author wrote the book.  So WTF James Patterson?  You’ve got co-authors?  I did not know this.  It actually, like eating a Lemonhead, was a pretty dull reaction at first, then BAM, it hit me… you are pushing out 10 books a year.  You’re kind of like the Duggar Family of the book world.  So i should have known, i should have guessed it, and i suppose it’s all good, but PUT THEIR NAMES ON THE BOOK!  I mean seriously.  If i were to do this same practice with my blog, it would go something like this:

Me:  Hey, co-author, here’s an outline of a blog i want you to write on how Dr. Ablow is an asshole.

Co-Author:  ok, so what i need you to do is find someone who can come up to your house, in, like, and hour, and take pictures of you shaving your daughters face.

Co-Author:  it will be great.  then we’ll post those photos, and i’ll write a script around how she is the future of our world, nay, our universe, and that you would be totally fine with her growing up gay, transgender, WHATEVER she wants, because shaving her face, like Jenna Lyons painting her son’s toes, will not require years of therapy to ensure they are heterosexual, because being anything else is just wrong, according to Dr. Ablow.

Me:  i love it.  But don’t say “nay.”  That’s totally going to give away the fact that i didn’t actually write this, and i’m not going to give you any credit, so it would seem weird.  But i’m sure that’s cool with you, because for sure you being my co-author will lead you to bigger and better things.  So keep that in your pocket.  You rock, co-author.

Something like that. Even though i’ll never make millions publishing blogs, nor do i fancy myself to be any kind of talented writer, at least every single stinking word is my own.

James, if you want to be a BRAND, then call yourself that.  Like Christian Louboutin.  Or Ralph Lauren. We all know they employ a plethora of talented designers, but their names are a brand, so we know they don’t design them all.  When i am at the SLC airport at 6:40 am and pass by the “Simply Books” and see your latest monthly publication sitting at #1, i assume you wrote it!

I don’t know… is it the same thing?  An author and a designer using their own name? I just can’t come to terms with the fact that it is.

OK. The second item up for grabs that threw me sideways was Queenan’s perspective on Book Clubs.

In that they suck, in his opinion.

” … The other thing is that when … you read Oscar Wilde or you read Moliere or particularly Shakespeare, I would consider it an invasion of their privacy for me to express any opinion about their work. The market has spoken. There’s nothing that we can add to this conversation. Someone once said about Emily Dickinson: The correct way to approach Emily Dickinson is on your knees.”

OK, here’s the thing, Mr. Queenan.  I have never joined or been part of a book club in my life, but i find your statement completely insulting.  How can you say that a discussion of a book amongst a group of readers could not unearth something new?  Could not prompt a person to re-visit a longstanding POV they’ve held onto because it’s “how their mother raised them” or “it’s just what we believed in our family?”

I don’t know the answer, but i DO know that your statements bothered me, so on a long run this morning, i had this thought:  If reading a book were akin to photography, then one would argue that every awesome picture of Fall leaves had been taken.  That if a group of amateur photographers posted their work, it would be no better, or offer no different angle than those that have already been taken by the others.

It would not even be worth TAKING the photo in the first place.  Leaves turn every Fall.  Don’t share your photos, we’ve seen it all.

OK, maybe i’m stretching here… but just go with me, ok?  Because i grew up in the Rockies, where the turning of Aspen’s was so breathtaking that to this day i see those reds, yellows, and oranges and i need to reach for my inhaler.

so this Fall, in Oregon… i have witnessed the most amazing colors that i’ve ever seen.  And i’ve seen SO many iterations of what this has meant to others, that i just felt compelled to share some photos.

Not by professional photographers, mind you, but from my pals.  my posse.

And this whole train of thought started yesterday on my long run through Portland.  I must have stopped 20 times to take a picture, the leaves were THAT amazing.

My favorite, you ask?

and finally, to end my run, this: 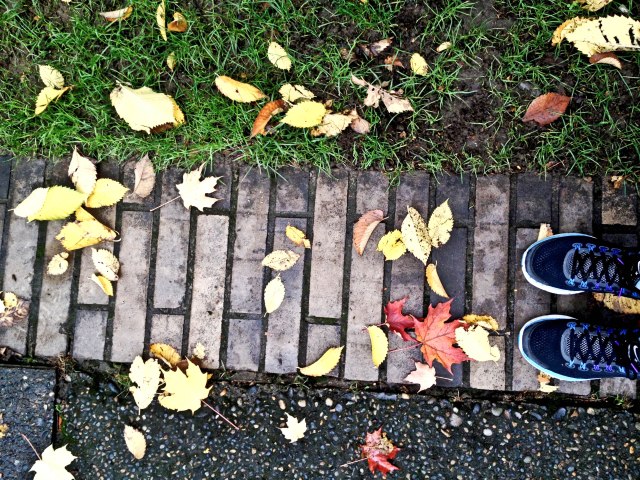 and then… i got home, and after a long hot shower, took a long meandering walk through Instagram, and found the most amazing photos from my friends… none of them pro’s.  It was like we all belonged to a proverbial “photo club” of autumn leaves and wanted to discuss, despite our amateurishness. 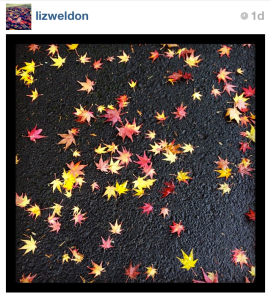 and alas, from my pal Elizabeth, a cyclist in her own right:

immediately followed by soon-to-be-mama Marijo, this beauty taken at the Japanese Gardens: 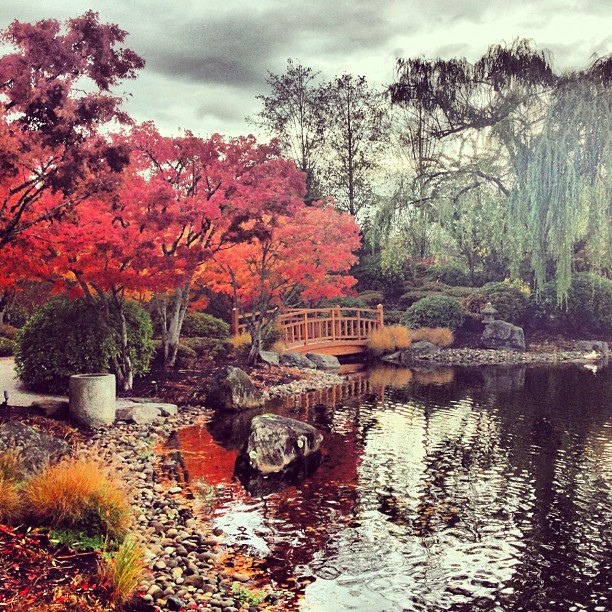 and then, from my friend Darin, who knows how much i cannot freaking STAND leaf blowers, and posted this gem of his little man: 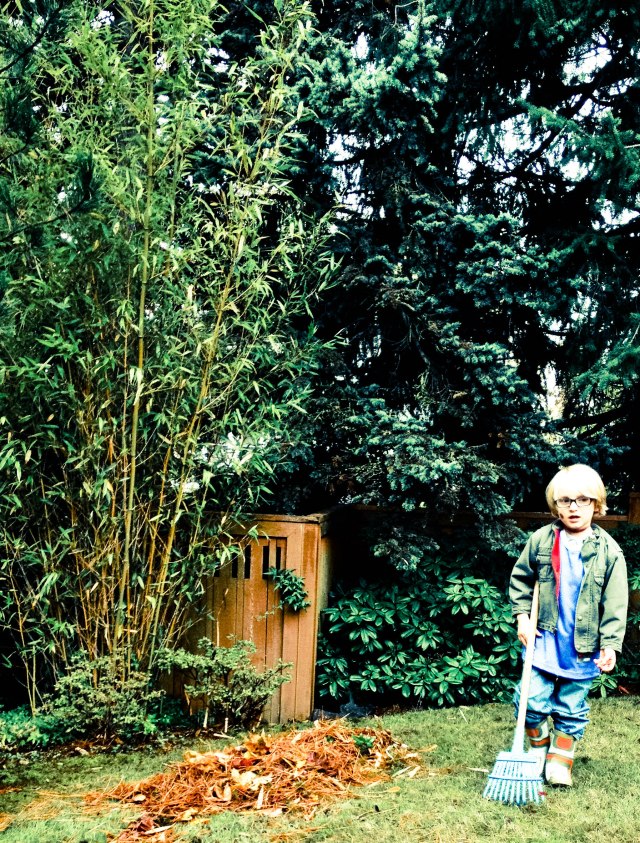 so seriously, how could the 6 of us not form our own little “Fall Leaves Photography Club” and discuss the emotion, the thought behind why each one of us took that second to hit our “shoot” button on our iPhone, and find something in that conversation that has not been discussed before?

I simply am trying to relate this to Mr. Queenan’s theory, hoping ya’ll are following the idiocracy of his statement.  It’s ok if you’re not.  It’s just where my head is at the moment.

And for the record, when it comes to books, i generally alternate between fiction and non-fiction, just to make sure i’m shaking it up a bit, but lately that ratio has become about 3-1 the former to the latter.  I read The Age of Miracles by (and ergo actually WRITTEN by) Caren Thompson Walker, which then led to a recommendation from two amazing friends of mine to read The Sisters Brothers by Patrick deWitt, which i couldn’t put down, and then another book fiend friend of mine recommended Gone Girl, which was done within two days.  After those three, i meandered into my office, and there was a book waiting for me from one of my favorite people on the planet, and i’m currently grounded in it:  Infidel: my life, by Ayaan Hirsi Ali.  And i believe next on my list will be May We Be Forgiven by AM Homes, only because one of my favorite book homies just texted me, saying, “I’m on page 22 and my head is spinning it’s so good and dysfunctional.”

No, none of these are Shakespeare or Austen or Dostoyevsky, but they are GOOD books, and i would open a bottle of wine and discuss them with any of my book loving posse anyday, as i’m sure somewhere in between the literal and the figurative, we’d find something never before discussed.

*if you want to see what Queenan’s list of “must read books” are, here you go.  But don’t you DARE discuss them… “the market has spoken.”

3 Responses to way to burst my bubble, Queenan.