I met Sabeeka Dar about 8 years ago.

As a Product Line Manager at NIKE, i would frequently travel to Boston to visit one of our key accounts, and Sabeeka was our buyer.

You’d think, so many years and jobs later, i’d have lost contact with her, but yet every trade show we’d keep running into each other, throw down a hug, a beer, and a “see you next winter!”

Then social media came along, and something awesome happened.

I learned a lot more about Sabeeka over her controversial one sentence status updates than i ever did discussing BRS 1000 outsoles or Phylon midsoles.

I learned, and i continue to learn, that Sabeeka comes from a different world than i.  One where her primary language, religion, and upbringing differs so greatly from mine.

So i couldn’t help do what i did.

I asked her to fuel all her one line status updates into a story, to publish here, about growing up in America as a Pakistani American Muslim.

I am so humbled and honored that she said yes to doing this, as it gives me such profound joy to have crossed paths with her in my life.

So to all of you reading this… grab a cup of tea, settle in your favorite chair, and allow me to introduce Sabeeka Dar:

I am an American.  I work full time, drive a fancy car, live in Cambridge, go out with my friends to Red Sox games, love PBR, cookouts on 4th of July, Cape Cod on the weekends in the summer, ski trips to Vermont in the winter.

If you didn’t know that I also love cricket, can read and speak Arabic and Urdu, and go to the mosque occasionally, you really wouldn’t have a clue that I am also Pakistani and a Muslim.

Yet at 34, I am actually struggling to figure out how to be a Pakistani American Muslim.

I have never, until recently, been into politics or policy.  I was living the typical American life in the bubble.  I was only concerned with what was going on around me and I could hardly care about what was happening globally.  I mean, what concern was it of mine if there were riots in Greece or Egypt?  I was really more intrigued by the incredible fact that Sarah Palin could see Russia from her house.

In August of 2009 I ended up going to Pakistan for a very short visit.

It had been a few years since I had last been there, a lot had changed in the 3 years that I hadn’t been home, yet it all felt super familiar.  However i immediately felt there was a shift in Pakistan.  My friends and family talked about the American policy over breakfast, lunch, dinner, tea, basically any chance they got; thinking that since I am American I can answer all their questions. The news was all about war, drone attacks, CIA roaming around freely in Pakistan etc.  The signs that I was seeing graffiti on the side of the building didn’t read Go USA! Go!

Instead, they read: Go, USA Go!

I came back really disturbed by what I had seen. How could everyone in Pakistan hate us? We weren’t even at war with these people!  We were “allies” in this “war on terror” but how come all that I witnessed in Pakistan felt so different?

I began reading online news from non-American sources. I started searching for the few articles that were published by people that were actually speaking out against the wars in which we were involved.  What I learned quickly was that it wasn’t just Pakistan; there was US resentment in a lot of places and I decided then that I needed to learn more, burst my bubble if you will, and get to the bottom of why i perceived the world to hate us.

When AC asked me if I wanted to guest blog, I said yes immediately.  A US Army Sergeant had gone and methodically killed Afghan civilians that day.  I was so fired up, so angry with our politics, so frustrated by the failure of our foreign policy that I felt I could have written a short novel!

We hadn’t even come out of dealing with the aftermath of “accidentally” burning the Qurans.  Fortunately we had managed to successfully brush under the rug the entire debacle of Marines urinating on dead Taliban.

The worst part about this is that I am listing only 3 major events that took place in this war in Afghanistan over the last two and a half months in which the US is directly involved.

Events, pivotal ones, that play a major role in making us more enemies.

Events that should show us that it is really time for us to move out of Afghanistan, finish this war, and acknowledge that we have no business being there any longer.

That we are done.

I believe history at some point will show this to be true.

When we as a people lose sight of things like this, it is a real problem that I think we need to really sit down and evaluate.

We have presidential candidates who dismiss Rules of Combat, referring to US Marines urinating on dead Taliban as “kids being kids”

We have people like Dana Loesch say really fun things such as “Can someone explain to me if there is supposed to be a scandal that someone pees on the corpse of a Taliban fighter — someone who as part of an organization murdered over 3,000 Americans. I’d drop trou and do it too. That’s me, though… Come on people this is a war.” ,  I wonder if anyone at CNN has ever heard of something called The Geneva Convention and the International Humanitarian Laws.

How have we turned into a country that is not outraged by such acts?  Are we that oblivious to basic human values and morals that we can be dismissive about such behavior and not be up in arms about it?

Do i need to be Pakistani to think that this was wrong?

Shouldn’t we all, united, think so too?

This is not about war, this is the kind of behavior that enrages the rest of the world and we should never be involved with things that justify being called a “dumb American”.

If anyone thinks that we don’t have a fear of Islam and Muslims in general, then in my opinion you need to take your blinders off.  We as a nation are just as Islamophobic as we are any other kind of phobias.

I get “randomly selected” for additional screening almost every single time I fly.  I get questionable looks when I travel to parts of this country where I am the only brown person in the entire county. Unless you have experienced this, it may be very hard to understand.

It is there, trust me, it is there.

Just like I won’t be caught making out with my girlfriend on the street of Indianapolis, I will also not be caught driving by myself in Alabama.  We have major racial issues in this country and Muslims are treated as a race, not just a religious group in America.

In 2011 a small church in Florida took it upon themselves to exercise their first amendment by planning to burn the Quran.  The irresponsibility of this act caused riots throughout the Muslim world.  The US Government had to convince Pastor Terry Jones into not making a move that would have seriously compromised the safety of our troops that all happen to be deployed in the Muslim countries.

So tell me, HOW do we make that mistake again?  How do we accidentally burn copies of the Quran mixed in with trash not even 1 year later?  How do we expect to not face consequences of this action?  It has been said that the Taliban and Al Qaeda need to do nothing but sit back and watch the US make blunder after blunder and infuriate the people themselves. I am not  appalled by this just because I am Muslim, I am appalled because I am an American that has some moral compass of why this is wrong.

We are running a successful drone attack in Pakistan.  Along with the targeted suspected terrorists it has killed hundreds of civilians.  Do you know how many times the US government has officially acknowledged the use of predator drones?  Obama has done it once since he has been in power due to extreme pressure on him to do so after a drone strike “accidentally” targeted a gathering of tribal elders and killed innocent civilians.

We are running a full scale drone attack on Pakistan that is increasingly coming under question for its legality.  To many, we are engaging in war crimes with this tactic.  I can’t say much other than the fact the name “O-Bomb-A” is seemingly justified.  It is so hard for me to understand the “American point of view” here, so unbelievably hard to not pay attention to the mass killings in which we are participating.  It saddens me that this in fact is what the world has come to.

Chris Jones of Huffington Post says it perfectly, “With credible reports of significant civilian losses and strong condemnation from the Pakistani government, the need for the U.S. to come clean about drone strikes has never been clearer. Distinguishing militants from civilians in northern Pakistan may be challenging. Yet the onus is on the U.S. to demonstrate that civilian casualties are as low as it claims and that combatant-status is properly defined and applied. Anonymous, unverifiable leaks and self-assured quips about bake sales can no longer be considered adequate or appropriate responses to civilian losses and potential violations of international law.”

And then last week we have a US Army Sergeant go on a killing spree of innocent Afghans.  I don’t know what exactly happened because you know we aren’t exactly covering this event in the US media again.  I know more from international media outlets on this topic today than from my own local paper.  A piece of news that deserves local attention so that us Americans know that one of us killed innocent people.

He killed women and children.

He shot them point blank and then proceeded to burn them.

And he has finally been charged with murder.  To me yet another piece of evidence that we need to come home.  We have done enough damage and are now causing irreparable harm that will have much longer affects than that of this war.

My hope is that that maybe you will read this and perhaps it will trigger for you what my trip to Pakistan did for me.

Maybe it will make you look at news differently.

Maybe it will deepen your interest in news articles that question our foreign policy.

Perhaps you will explore not more of what is going on in Afghanistan, Iraq and Pakistan but maybe our involvement in the rest of the world because ultimately learning lessons is what life is all about.   When we don’t learn from our mistakes, we find ourselves crashing and burning over and over again.

I fundamentally believe that we as a country have not learned anything.

We need to open our eyes and pay attention to our actions, and how they affect the world around us.

We are done with Iraq, yet I am not sure what we got out of it.  Are you?

And because we can’t rest, apparently we are on track to do all of this all over again in Iran and doing so blindly without any understanding of where we stand right now and where this will lead us.

I am an American. 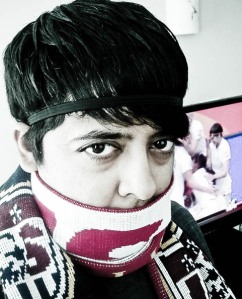 I just wish the US Government would end my struggle with that fact.

Thank you for reading.