damn you, pussycat, damn you.

Posted on January 14, 2012 by corradiniphoto

We adopted new kitten from the Oregon Humane Society about a month ago and she is SUCH a bitch.

Here was our conversation this morning:

Cat: i want a cat portfolio.

Cat: because i am a super hot cat.

Me: you are kind of full of yourself.

Me: you’re not the boss of me.

So here is the photoshoot i did of my cat today.  i actually had no intent of making this a blog, but it’s “Winter Storm of the Entire Goddamn Century, 2012” according to our Portland newscasters and therefore we’re all on lock down because 3 snowflakes hit our driveway, so i’m fucking bored out of my mind and have already watched the one show worth watching anymore.

Also, i consider myself an expert on shooting from a really low angle, AND i have a new camera, so really, my cat didn’t make me do this at all.  i TOTALLY wanted to do this anyway.

intro photo.  she just wants you all to get comfortable here, kind of a “big picture”photo. Also, it would appear she’s still PRETTY pissed off at me for not immediately agreeing to the shoot.

headshot.  also paw shot.  and by that wicked smile, you can immediately tell she wasn’t entirely satisfied.

i probably wouldn’t be either, as a feline supermodel.

yeah, you know this one.  look at that tongue.

Cat is now threatening to move to Canada because i have cut her head off.  In Canada, apparently they would never do that.

so she took manners into her own non-opposable thumb hand paws: 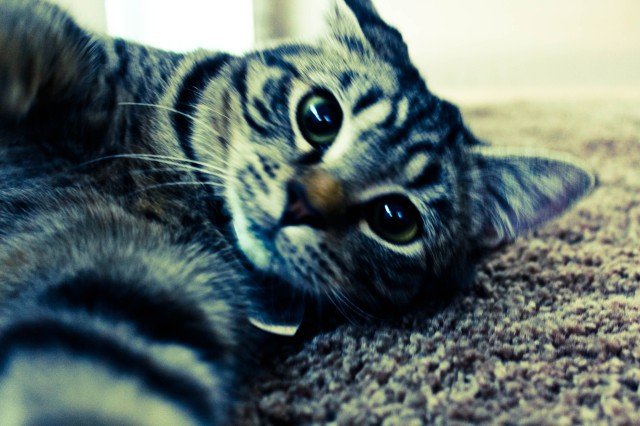 i gave it one last try, shooting her in full force, sort of the “i’m, like, totally spayed so we can bonk like bunnies and i won’t have kittens” kind of look, to post on the Cat Singles Site that she uses on her special computer keyboard that doesn’t require her having opposable thumbs (she has no idea how spoiled she is).

So we’re done.  I’ll never shoot her again.  what a diva.

however, when she wasn’t looking i snuck back in.  And what i saw, oh what i saw.

i saw her dance.

who is my hero.

so i love her.

and you should too, because prior to us finding her, she had a really miserable life as a stray, and then a second miserable life in a cage, so we’re hoping that lives three through nine are with us in the Batcave, even if she is a demanding bitch.  that purrs in the key of C minor.

You’ve got a three day weekend, you’ve got a warm house, and you’ve got opposable thumbs that can drive a car to the Oregon Humane Society or the Cat Adoption Center.

Either one can End Petlessness (though the tagline belongs to OHS).

i can think of a few of you (ahem) that i won’t openly call out as able to adopt but i know are the kindest women in the world. and probably could adopt a cat.  for me. because you love me. except for KK because you live in China and i’m pretty sure the Oregon Humane Society does not exist there.

To all the inhalers, steroids (both inhaled and pill form, but legal) i take to allow me to hum to her purr in C minor due to being stuck in a life threatening snow storm brought on by (now up to 16) massive snowflakes, i can attest to one thing:

it is worth it.

8 Responses to damn you, pussycat, damn you.