the worst football player in the United States of America.

Posted on November 13, 2011 by corradiniphoto

My junior year of college, i met a guy.

Admittedly that might be the most boring opening sentence ever.  Usually you want that first sentence to really capture the reader, convince him to keep reading.

But truly, it started with that.  I met a guy.

He was not particularly attractive, nor not. He was average height, maybe slightly taller, let’s say about 6’1″.  Blondish hair, but not too blond.  Perhaps his worst feature was slightly pocked skin from a few years of teenage mutant acne, but nothing so much as to deter you from a conversation.

What struck me as odd, what warranted our first conversation, was that he was slightly older than the average Bobcat at Bates College in Lewiston, Maine.

He was living in the same “house” as my boyfriend, and, like him, also played on the football team.

OK, to understand why this story is so amazing, you have to know a little something about Bates Football.  And since i don’t really know a goddamn thing about the sport, i am going to quote DIRECTLY from an ESPN article entitled “Worst College Football Team.”

“Bates College plays football in the Division III NESCAC (New England Small College Athletic Conference), which is basically glorified high school football. From 1990 to 2001, Bates went 10-78-1 (less than a one win per year average), including an astounding 37 in a row from 1991 to 1995. During a game in 1993, Bates fell behind Williams 35-0 — in the first quarter! Take away the aberrational 1999 when they went 4-4, and Bates has won only a staggering six games in the last 11 years. The NESCAC is most likely the lowest level of competition in college football in the country. Bates is in the midst of a historic run in terms of futility playing in that conference.”

And the best part is that the dude that wrote this article actually WENT to Bates!

So you get it, right?  Football was not our forte.  Students did not come to Bates for our football program.

So back to my friend (and i’ll keep this tight, get to the point here…).

I was hanging out with my boyfriend, and i happened to ask this guy what his story was.

You see, Bates is a small liberal arts school in basically the industrial armpit of the state of Maine, and at no small cost.  You don’t spend 5 years there, you don’t come after a few years out of high school after you’ve “found your path in life,” there is no graduate school.  So he was a bit of a misfit, being well over our 20-21 years old.

So i come to find out that he left high school to join the military.  And in the military he played a bit of football.  Not enough to get him to a Division I or II school, but enough that he might have a chance at Division III.  He was a quarterback.

So he finds his way to Bates.

And he was the THIRD STRING QUARTERBACK.

To summarize.  My friend Jon was the third string quarterback on the worst team in the weakest region of the lowest conference in the US.

He was the worst football player in the United States of America.

1) He didn’t regret a day of it, and like all of us, we claim Bates to be amongst the best 4 years of our goddamn lives.

2) He served our country and afterwards sought an education that i am sure both of those experiences combined have led him to do great things.  I imagine him to be an incredible leader.

3) If what was uncovered this week at Penn State had EVER hit our campus, being the worst football team in America or the winningest, i am damn near sure, no, i am convinced beyond doubt that we would have celebrated every move made to fire every single goddamn president, athletic director, coach or fucking PERSON associated with the coverup or undisclosed rape and sexual assault of 8-10 year old boys.

Shame on you, Nittany Lions students that staged protests to the decision by the University to fire all who passively did the least the law required.  It’s shameful.

May the victims find peace and the perpetrators, justice. 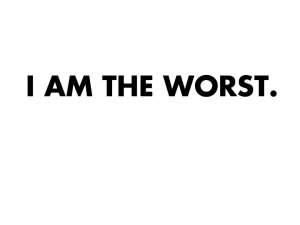 4 Responses to the worst football player in the United States of America.