Posted on April 7, 2011 by corradiniphoto

I can’t even find the right words for the first sentence of this post.

Maybe it should be a simple word.

If you know what this means, then you have a great handle on Arabic.

If you don’t, then i shall explain.

In Arabic, Mabrouk is what you say to a person when something amazing has happened in their life.

This could come in the form of a first home purchase, or a fabulous new hairstyle, or the birth of a baby girl.

Roughly two decades ago, give or take 3 years on either end,  seven of these baby girls were born.

And they started Ski Jumping.

And they were fearless, and had hopes of Olympic dreams, because certainly they would be jumping in the Olympics one day, as their male counterparts have been doing since 1924.

Let me rewind for a minute.  Tell you the story.  It’s worth the next 3 minutes of your life.

Seven years ago, my mother met a young woman named Lindsey Van over coffee in her hometown of Park City, Utah.  She was the National champion women’s ski jumper at the time.  So mom says something like, and i’m paraphrasing here… “cool.  so you getting ready for the Olympics, then?”  And Lindsey probably (again, paraphrasing) said something akin to, “no, because we can’t.”

Weelllheehellll… if you know my mother, you know that this didn’t sit well.  In fact, it was Day 1 of the next 7 years of her life.  She joined then became President of Women’s Ski Jumping USA.  Their goal?  Get those girls into the Olympic games.

Took the case to court for inclusion in Vancouver.  Won the verdict that YES, it was discrimination, but NO, it was not Vancouver’s fault.  Talk to the IOC. 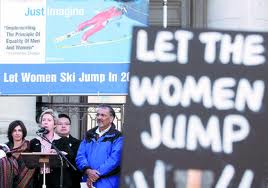 In the meantime, women’s Boxing gets into the London 2012 Summer Games, making London the first Gender equal Summer games.

Women’s Ski Jumping has to self fund.  You’re not an Olympic Sport, you find your sponsors (thank you Visa!), you pay your own way.  So they fund raise.  and they fund raise. 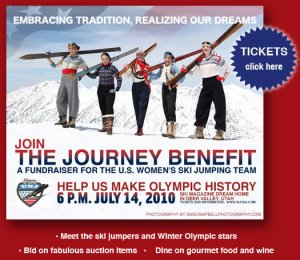 (yes, these are the girls, in an amazing photoshoot, circa the time when their male counterparts started jumping in the Olympics!!!)

And then people really started understanding what this represented.

The fact that they were excluded, despite satisfying all IOC regulations, meant that there was discrimination within the games that i have loved watching since i was a little girl and was not allowed to watch TV at ALL (oh, my mother was a very, very strict one) with exception of the Charlie Brown Halloween Special, Sesame Street (sponsored by the Letter G, and the number 7), Rudolph (remember that whiny sound his nose made when it lit up?), and the OLYMPIC GAMES.

The girls can’t jump.  One girl, Alissa, accompanied her brother to 2 olympic games…and couldn’t compete, even though she could fly even farther than he could.  imagine that.

And in case you wonder what that feels like for Lindsey and her teammates and their fearless leader, Deedee Corradini, to hear this news, a photographer (photo credit coming) captured it perfectly.  it looks something like this, taken in our home in Park City, Utah: 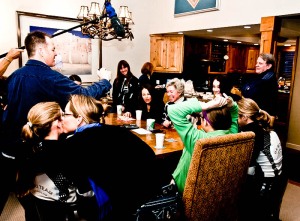 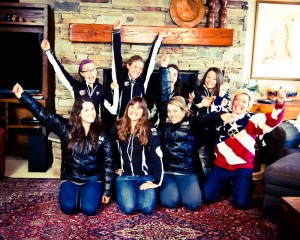 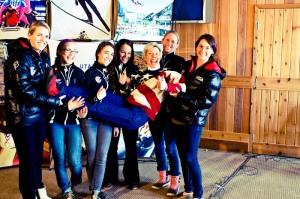 To another glass ceiling, shattered to pieces.